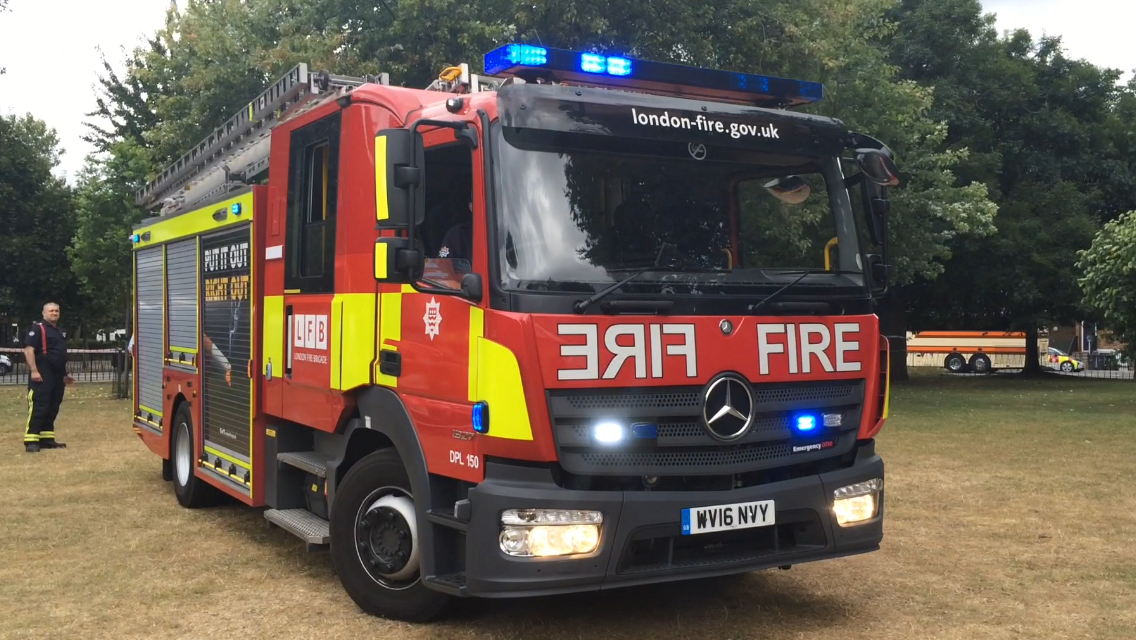 This post explores the application of gradient boosted algorithms to time-series modelling, as we try to predict the number of London Fire Brigade Call outs using seasonal patterns, and 3rd party weather data.

It will be helpful for readers to a foundational to intermediate knowledge of data science techniques, in order to follow along with this post.

The London Fire Brigade (LFB) is the statutory fire and rescue service for London. It was formed by the Metropolitan Fire Brigade Act of 1865, under the leadership of superintendent Eyre Massey Shaw.

It is the second-largest of all the fire services in the United Kingdom, after the national Scottish Fire and Rescue Service and the fifth-largest in the world, after the Tokyo Fire Department, New York City Fire Department, Paris Fire Brigade and the Scottish service, with 5,992 staff, including 5,096 operational firefighters and officers based at 102 fire stations (plus one river station).

As well as firefighting, the LFB also responds to road traffic collisions, floods, trapped-in-lift releases, and other incidents such as those involving hazardous materials or major transport accidents. It also conducts emergency planning and performs fire safety inspections and education. It does not provide an ambulance service as this function is performed by the London Ambulance Service as an independent NHS trust, although all LFB firefighters are trained in first aid and all of its fire engines carry first aid equipment. Since 2016, the LFB responds to provide first aid for some life-threatening medical emergencies (e.g. cardiac or respiratory arrest).

Predicting the number of hourly call-outs for the next week

In this analysis we will build a series of machine learning models capable of predicting the number of hourly call-outs for different types incident.

The various call-out types that the London Fire Brigade respond to are classified in to a number of sub-categories:

Different call-out types are likely to have different causes. So we will look at two approaches to the problem of modelling call frequencies.

Call-out information for the London Fire Brigade is available from the London Data Store.

Weather is one factor that we might expect to influence the number of call-outs, particularly in the case of flood incidents, but we could also speculate that weather is likely to effect the number of traffic collisions, and potentially fires.

To test this theory we will supplement the call-out information with hourly weather data. As I was tight on time when putting together this post, I opted to purchase a batch of hourly weather data from OpenWeatherMap for $10; however, there may be freely available alternatives.

We assume that similar data would be available via forecasts.

This post will ulilise the LightGBM implementation of Gradient Boosting, you can read more about LightGBM here. I won’t go in the details of the implementation in this post, but a key advantage of this algorithm over the XGBoost is that the LightGBM algorithm trains faster and provides very similar results in terms of performance.

For this project we will be making use of the Python programming language, and we will utilise the following libraries and tool kits.

Large datasets will load faster from pickles than from Excel, so to save time when we re-run the notebook let’s pickle our dataframes, and load from the pickles next time.

There’s quite a lot of data here, and there’s certainly a lot of scope for investigating business questions outside of predicting call-outs, for example arrival times, which is something I’ve looked at before. 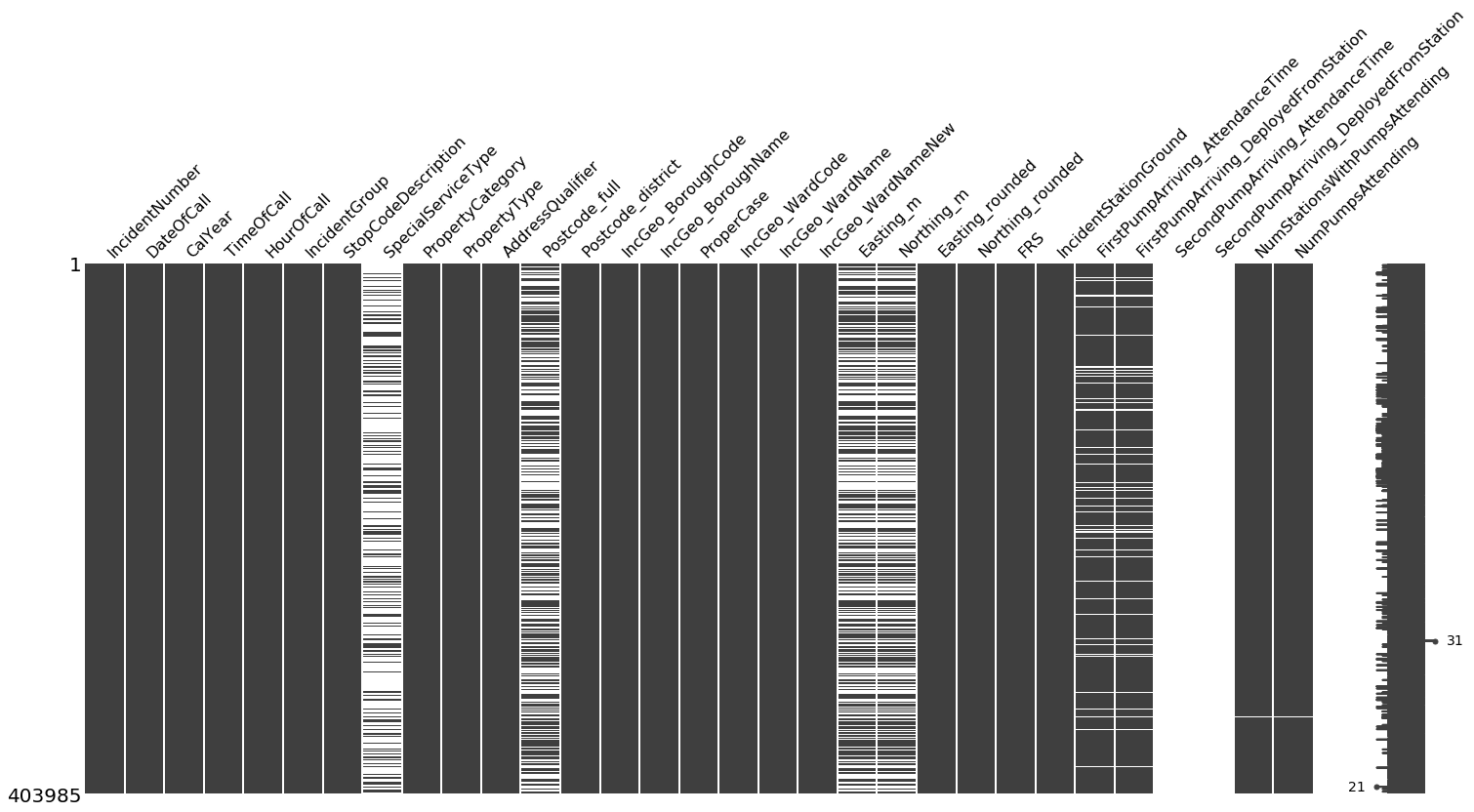 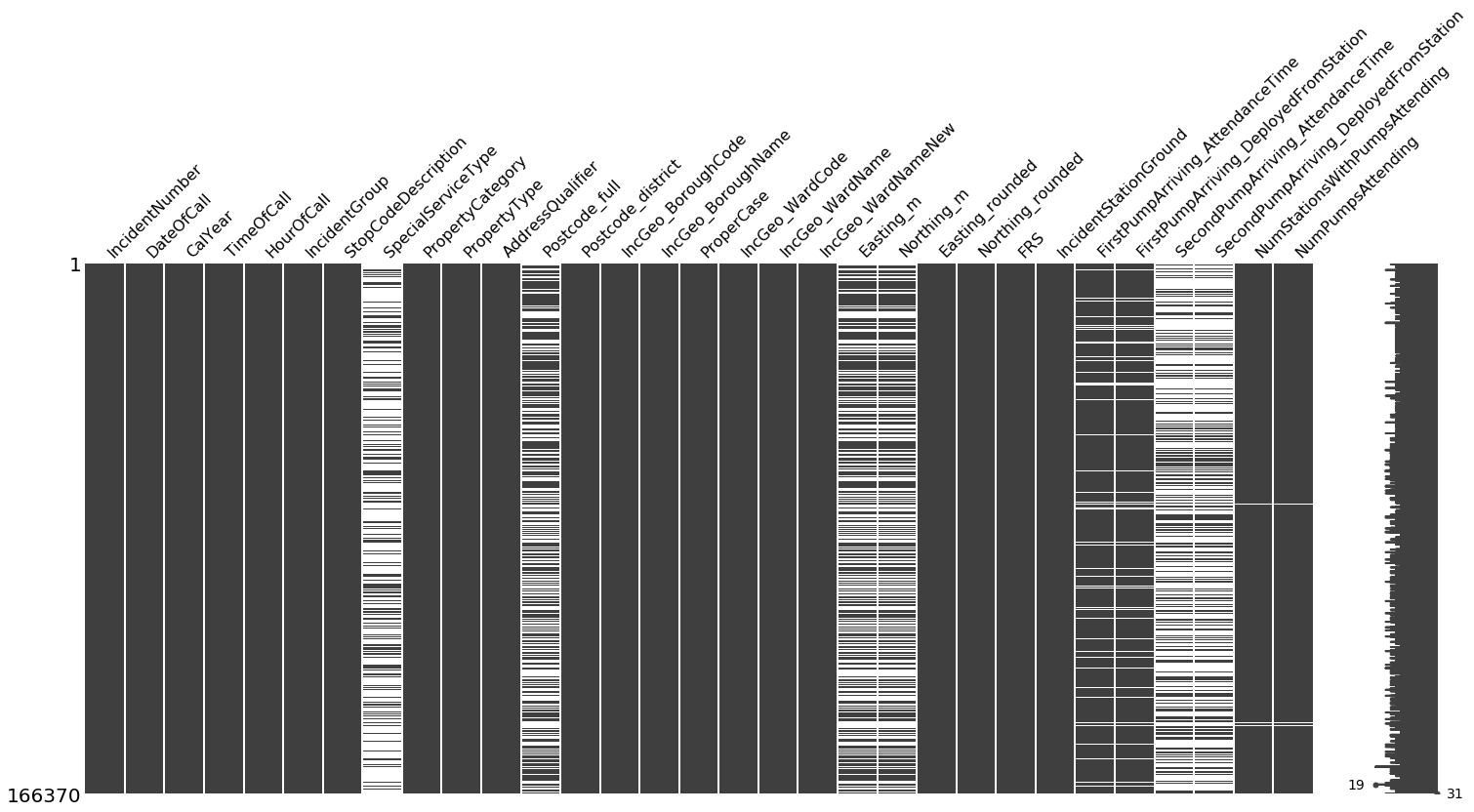 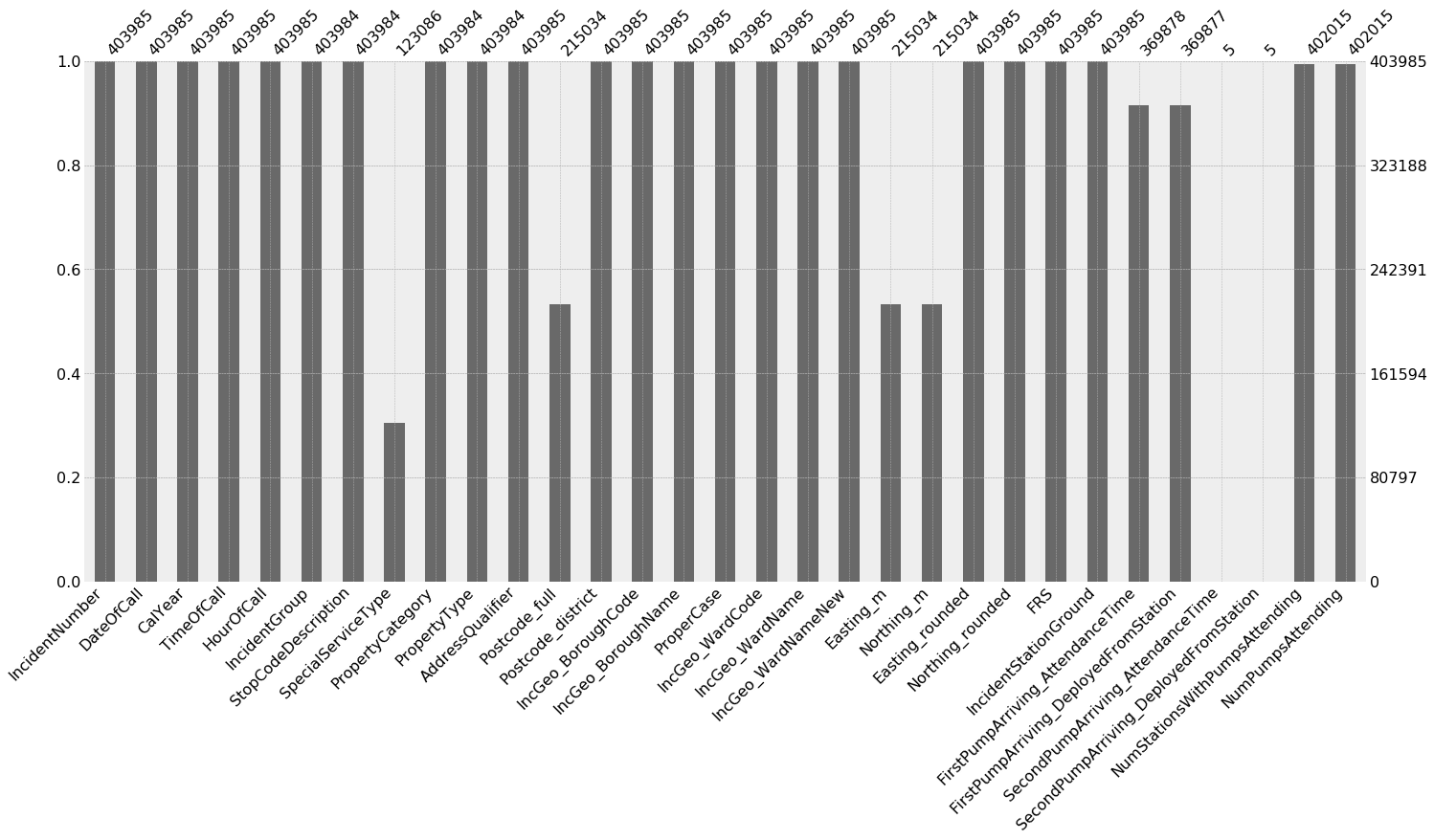 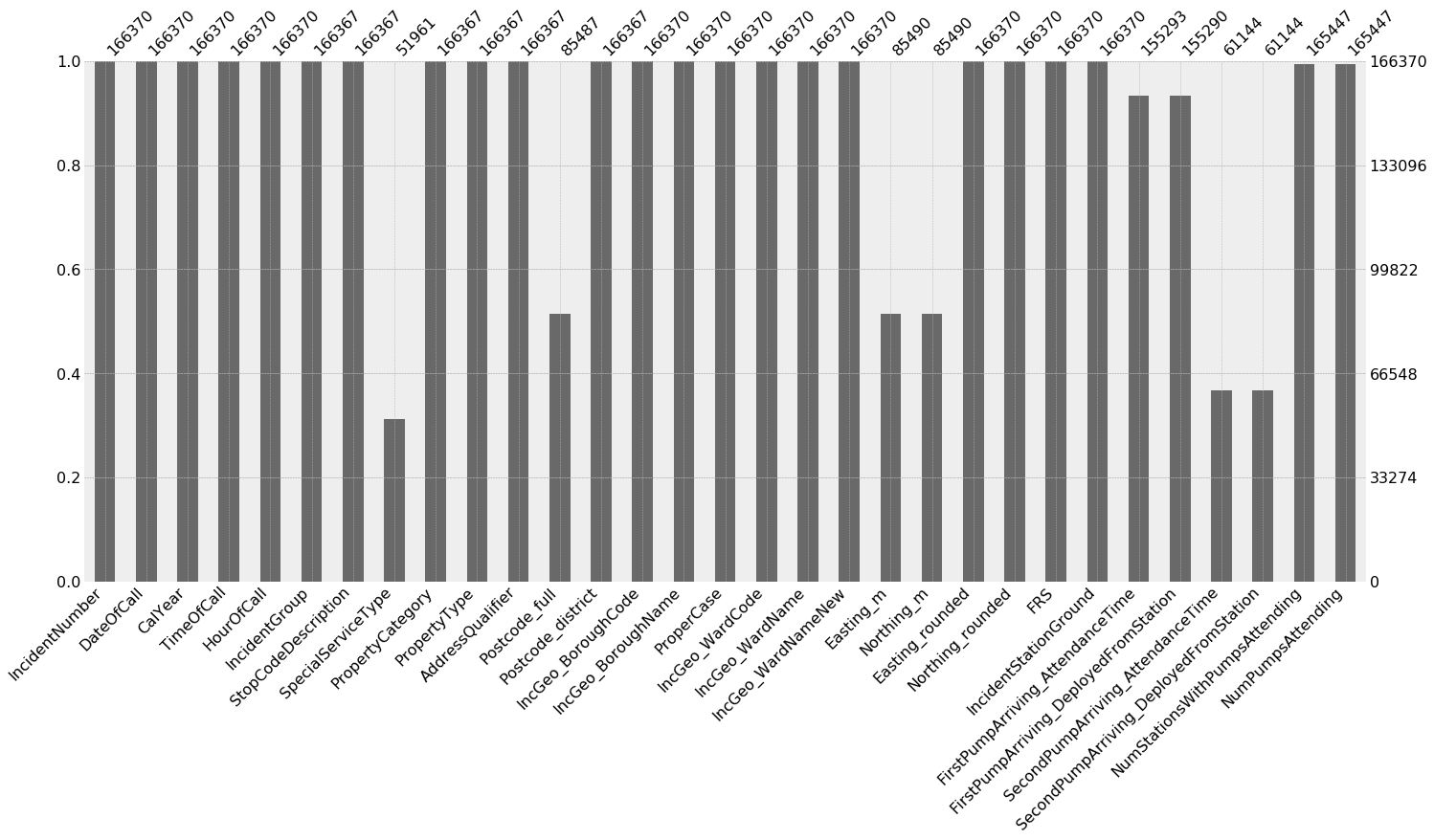 The original dataset contains a lot of information about each call-out. Unfortunately much of this information is not usable feature information for the purposes of this project, as this data would not be known before the incident has occurred.

The columns that we will use are the DateOfCall, and Incident group information. We will use this data to generate the target variables for the project.

The table below illustrates the basic data structure of callouts per hour by type.

On first observation the call_out_per_hour DataFrame does not have much scope for feature engineering, but there’s actually a few simple techniques to generate some features that can be used with the majority of time series datasets.

We can try and capture seasonal trends in the data by engineering a set of categorical features based on the time of call information. Below we create features to capture: hourly, weekly, monthly, and annual trends.

Both cyclical and “holiday” event trends can be captured in this manner.

Another source of feature information is what I would call shifted target information or lagged features; that is we can look a recent, or relevant, observation of the thing we are trying to predict, and use this as a feature in the model.

The important principle is that your model data must not contain information that would not be available at the time of prediction so a one day shift is only available one day before. So your model is only predicting one day ahead. If you wanted to forecast calls for the entire year upfront, you would not have access to the one day shifted information, and so you would need to make appropriate modifications to the shift i.e. 365 day shift.

In the introduction we formulated the business problem as trying to predict seven days ahead so I have only included shifted targets that would be available 7 days before.

We will also examine the impact on model performance of leaving these features out of the model, as leaving out the shifted variables will make the model’s use less restricted.

Let’s do a very brief Exploratory Data Analysis (EDA) of our target data. We can start by plotting the average number of daily call-outs per week for each call type, and all call types.

We can observe some periodic features in the data, more call-outs seem to occur during the summer months. We also note some large spikes in the data.

This pattern is more clearly seen if we average the observations over a 3 hour period. 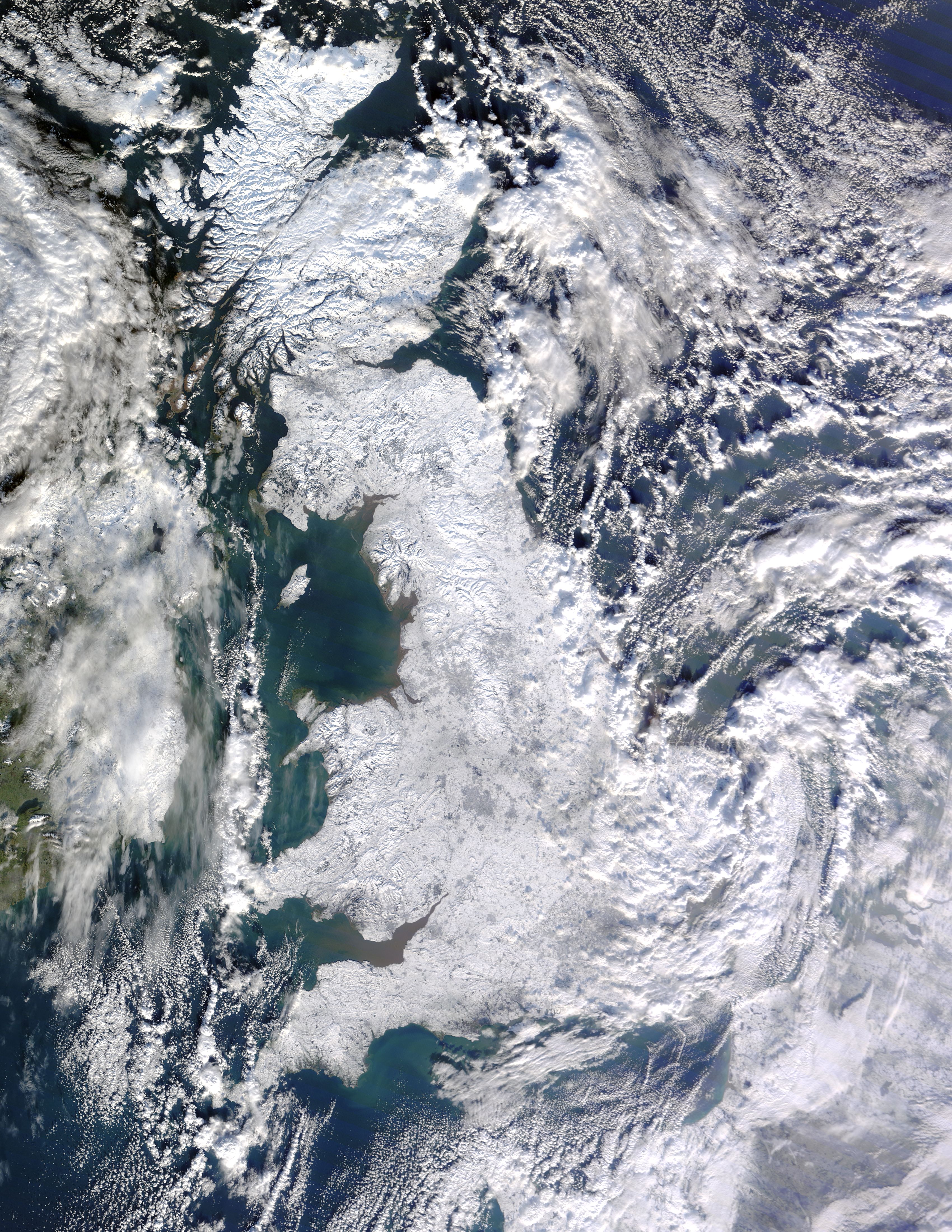 Many of the call outs seemed to be weather related, this is particularly true of some of the spikes in the call out dataset. For this reason I thought it would be interesting to introduce some third-party weather data into the analysis.

The weather data used in the model was purchased from the OpenWeatherMap website at a cost of $10, although you may be able to find free datasets in the public domain, this seemed liked a reasonable cost.

As the dataset is proprietary I will not be including any graphics which would give away the full content of the dataset, however the code below details the fields from the data which I have selected for use as features in the model.

Now that we have our seasonal, shifted, and weather features we just to need to join the datasets together, here we make use of the pandas merge_asof function.

We also fill any missing values with -999.

LightGBM has a nice feature to allow you to declare columns as categorical and avoid one-hot encoding the categorical variables, however I received a number of warning messages when using this feature in the setup below, so I have opted to utilise the pandas get_dummies as a “quick and dirty” alternative.

For time-series data it is sensible to have an “out of time” test set. Here we hold out the 2018 as a test set, and we use the 2017 and prior data as a training set.

We also generate a validation set from the training data. The validation set will be used in conjunction with the early stopping procedure, described below.

We create an instance of the LGBMRegressor class, which provides an sklearn style interface for LightGBM, we initiate the model with n_estimators @ 50,000 but we also set the early stopping kwarg in the fit parameters dictionary, which allows the the model to choose to stop early if no improvement on the validation set is observed after 50 boosting rounds.

The code also includes a basic grid-search to tune the hyper-parameters. This an area of the modelling that could easily be improved. We have also used a time-series split rather than a standard k-fold split.

The make_model function houses all of our model training code, as we are going to create multiple machine learning models: All Call-outs, Fire, Special Services, and False Alarm, we want to wrap this code in a function to avoid repeating ourselves.

We then train a model for each of the targets previously specified.

We have now trained our machine learning models. Let’s analyse the model performance on the training, and test datasets.

We start by generating a table of predicted vs actual call-outs for each of the models. We keep the train and test sets in separate DataFrames.

An initial plot of the predicted vs actual performance shows that the models seem to pick up the daily seasonality. 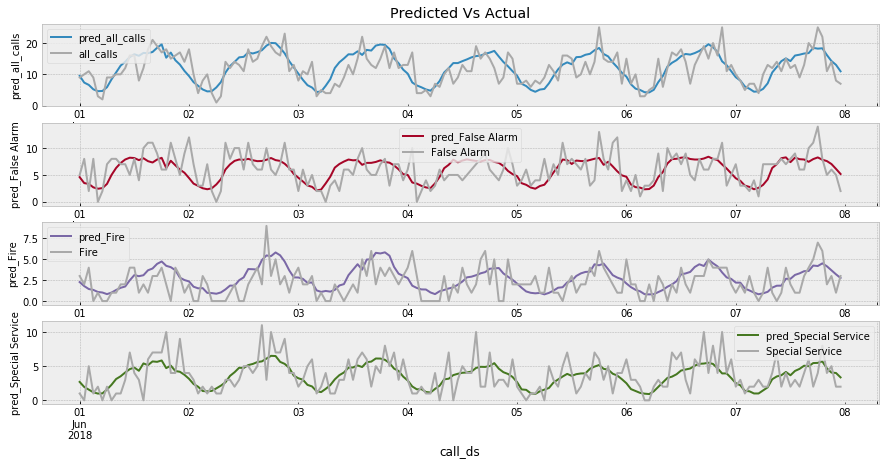 It is a very good idea when investigating machine learning problems to establish a simple base line model to compare the trained model’s performance against. Baseline models should be simple to implement and understand, and easily reproducible.

In this case a baseline model could be to use the “shifted” by 7 days features as predictions, the models performance can then be measured as the improvement in mean squared error relative to the base line model predictions.

The code below generates some baseline performance comparisons for each of four individual models, plus an ensemble model which combines the individual call-out types and is evaluated against the “all_calls” target.

The metrics suggest that the new model delivers a ca. 50% reduction in mean squared error relative to the the persistence model.

Interestingly the ensemble model out performances the single all_claims model: four models are indeed better than one.

The code below generates scatter plots of predicted vs actual call-outs, and computes the mean squared error, and Pearson’s correlation coefficient for the dataset. 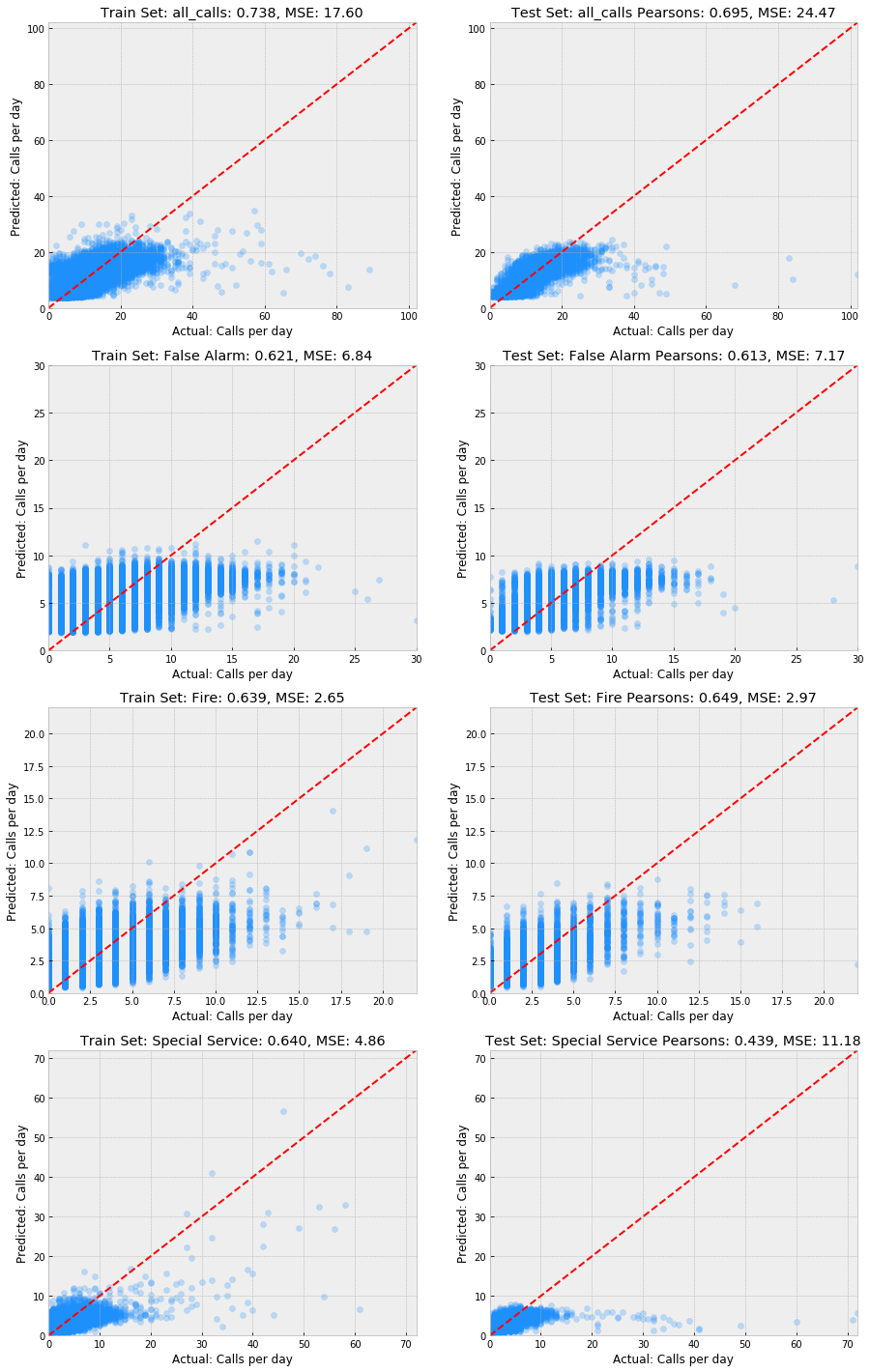 Results for the persistence model

The persistence model results are plotted below, for reference/comparison. 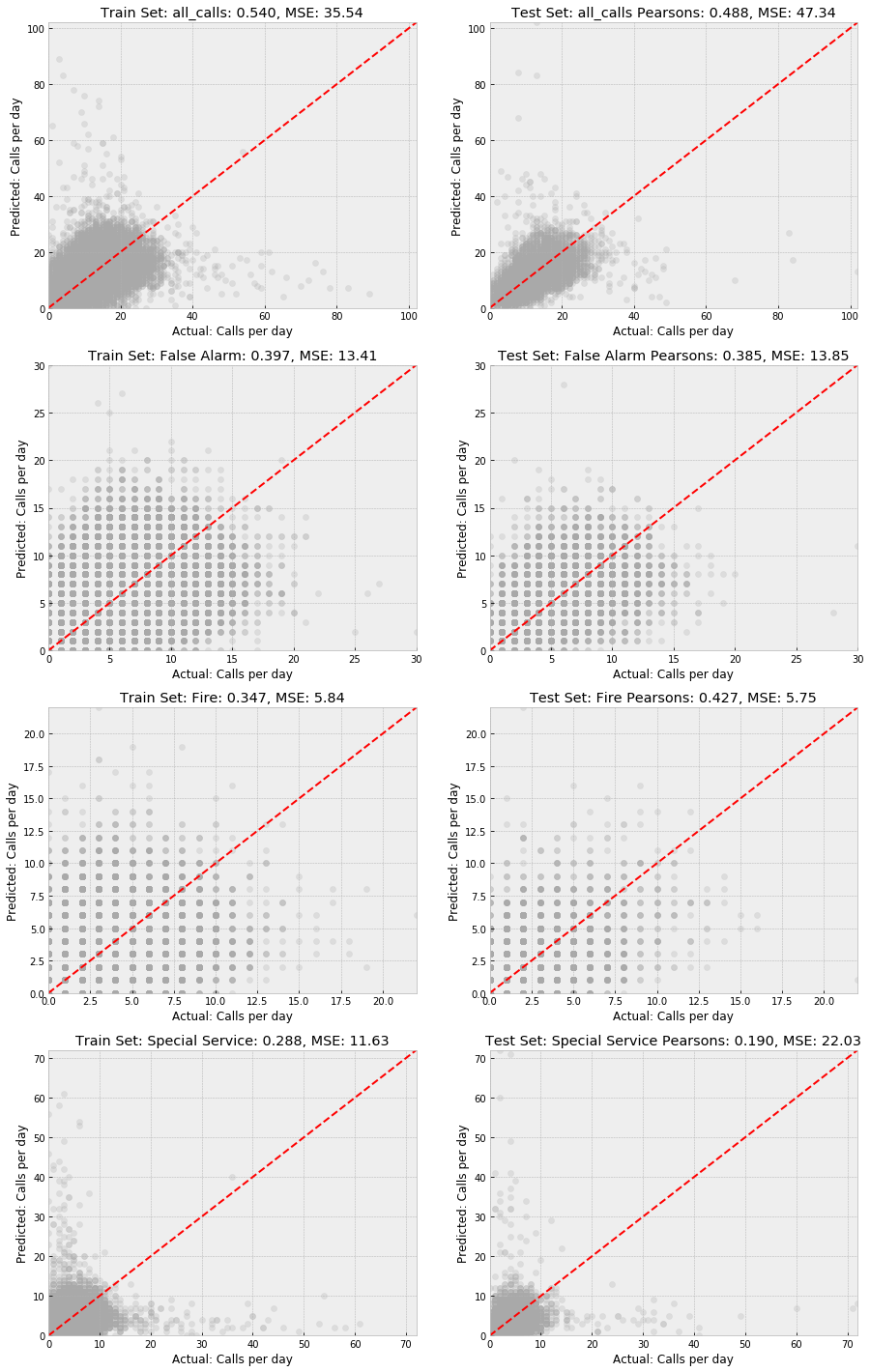 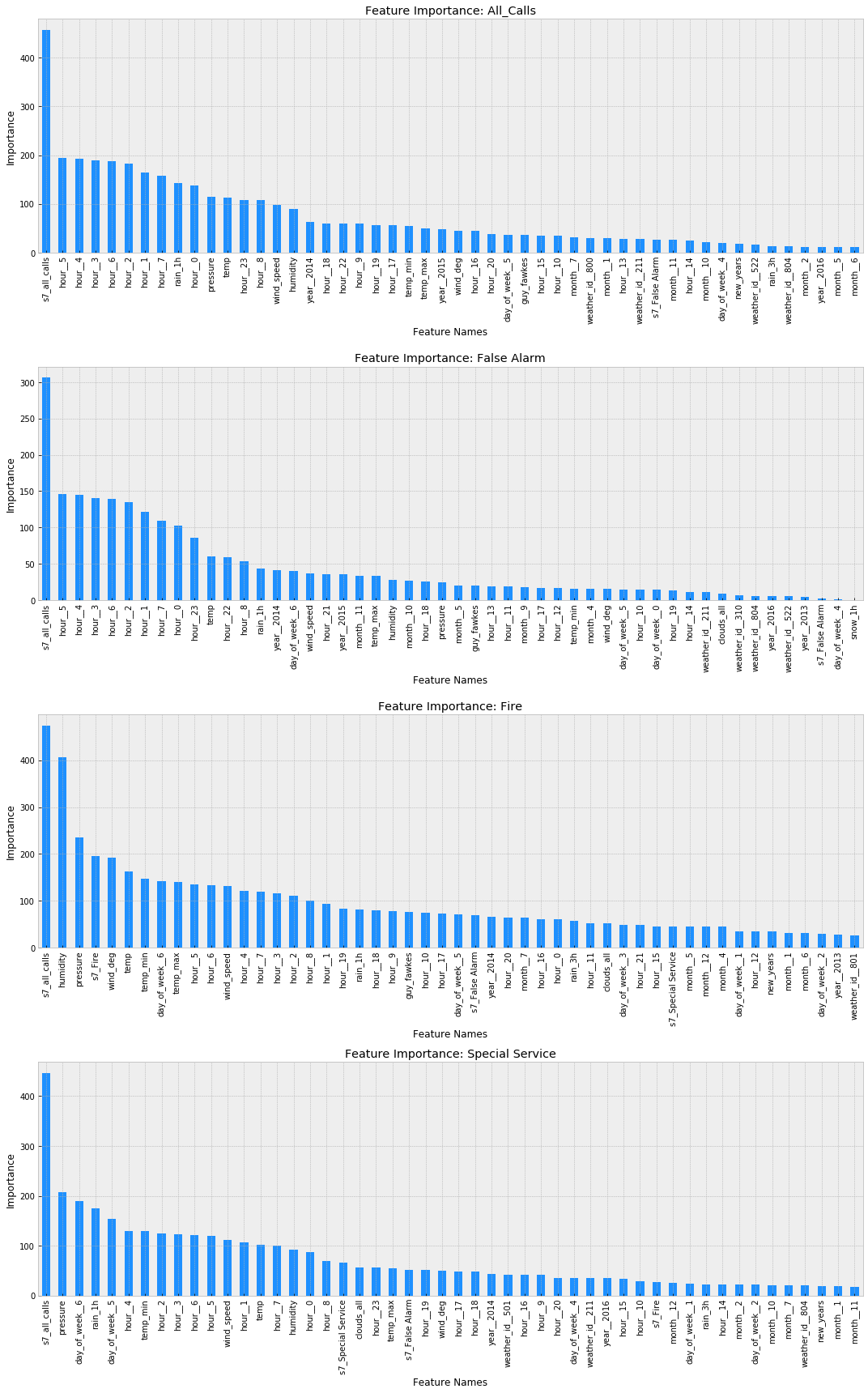 Thanks for taking the time to read the post. There’s still a lot we can do to improve the model, particularly the hyper-parameter tuning and further feature engineering, but hopefully this post illustrated some interesting practical approaches to modelling time series with gradient boosted models.